Any author will tell you that getting past that first crappy draft of your latest novel will keep you awake at night. In my case, it keeps my husband awake.

“Jim, wake up! Wake up! You haven’t read those latest chapters have you? I hope not because I’m changing everything. Too many fantasy elements. I didn’t like it. You didn’t read it, did you?”

“It’s been bothering me all night. I’ve got to get up and make changes first thing in the morning.”

“I just wanted to be sure you haven’t read it. And make sure that you don’t read it until I fix it.”

“It’s 1:30. I’m not going to look at anything except the inside of my eyelids. Goodnight.”

“You’re not going to forget that we had this conversation and then get up and read it while I’m still sleeping, are you?”

“Because I wouldn’t want you to read it with that fantasy element. I knew it as soon as I wrote it. It didn’t fit.”

This kind of conversation takes place during the entire extent of my first draft writing. It can include the following:

“I don’t think the character names are right.”

“Did I have too much detail? Was it boring?”

“I’m not sure if I want the killer to stalk them. What do you think?”

And on it goes until the lousy first draft is finally done and I can move on to revisions and rewrites. Come to think of it, I wake my husband up for those, too. No wonder people in the dog park at 7:00 A.M. ask him if the dog kept him up all night. And he always says the same thing.

“Not the dog. It must have been one of the cats. They can be so annoying and demanding when you’re trying to sleep.” 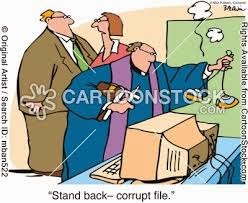 I literally froze in terror when I read the message on my computer screen. The User Profile Service Failed the Logon.  It was accompanied by the sinister red circle with a large white X in the middle. This was worse than getting a letter from my junior high telling me that I had failed the physical fitness test! Much worse. It meant “Verboten! Forbidden! You can’t go any further!”

I did what I usually do when weird things happen to my computer. I shut it off and tried it again. Did that for five times until I realized that I was following the definition of insanity. So, I took it one step further. I unplugged the thing. Then tried it for three more times. I even checked all the wires and plugs since the cats have a nasty habit of loosening them. Still no luck.

By now my fingers were actually trembling. My God! What have I lost? I wasn’t worried about anything on the internet. I could access that anywhere and anytime. As far as my pictures were concerned, no big deal either. They were still in my camera’s internal memory. I haven’t cleared that out since Clinton was in office. But my novels that were still in progress? That was a different story.

Thankfully, I sent my new sci-fi thriller to three of my editors. Wasting no time, I called one of them to make sure that it would be backed-up on their computer. Whew! My other novel, the fifth in the “Light Riders” series was still in its infancy. Five thousand words worth that represented hours of research. I had gotten pretty cavalier about this stuff and only backed-up the first two thousand words. That’ll teach me. By now, full-fledged panic was beginning to set-in. It was augmented by the fact that I was scheduled to present a workshop for the West Valley Writers and the entire thing was on the computer. The computer with the You can’t go here because something failed. Too darn bad for you.

Somewhere in my brain a voice kept saying, “This probably happens all the time. There’s got to be a fix for it.”  Thanks to Google and the smartphone, I found it. Trouble was, I couldn’t understand a word of it!
Step One – Trawl Through the Registry
Who uses the word “trawl” anymore and where’s the registry?

Step Two – Two SID Keys with the Same Number
What the heck is a SID key?
Step Three – Only One SID Key Ending in “.bak”
Yes. This helps me a lot!

It was time to take real action – call a profession and try not to let them know you’re scared. (The price could go up!)  Lucky for me, a have just that person in my family and he didn’t freak out when I used words like SID and Registry.
“Help! Help! There’s like a zillion steps to fixing this thing!”

For the next thirty minutes I listened to everything he said and just pushed whatever keys he told me to. Voila! It worked! A miracle! I was up and running! No more nasty red X’s to scare the daylights out of me.

Then, I immediately took action to ensure that my important files weren’t lost. I printed them out!  That’s right. Old School! Now as long as my copier doesn’t give me any heart-stopping messages, I’ll be OK!

P.S. I have the greatest, smartest cousin in the world!
Posted by Ann I. Goldfarb at 10:58 AM No comments: 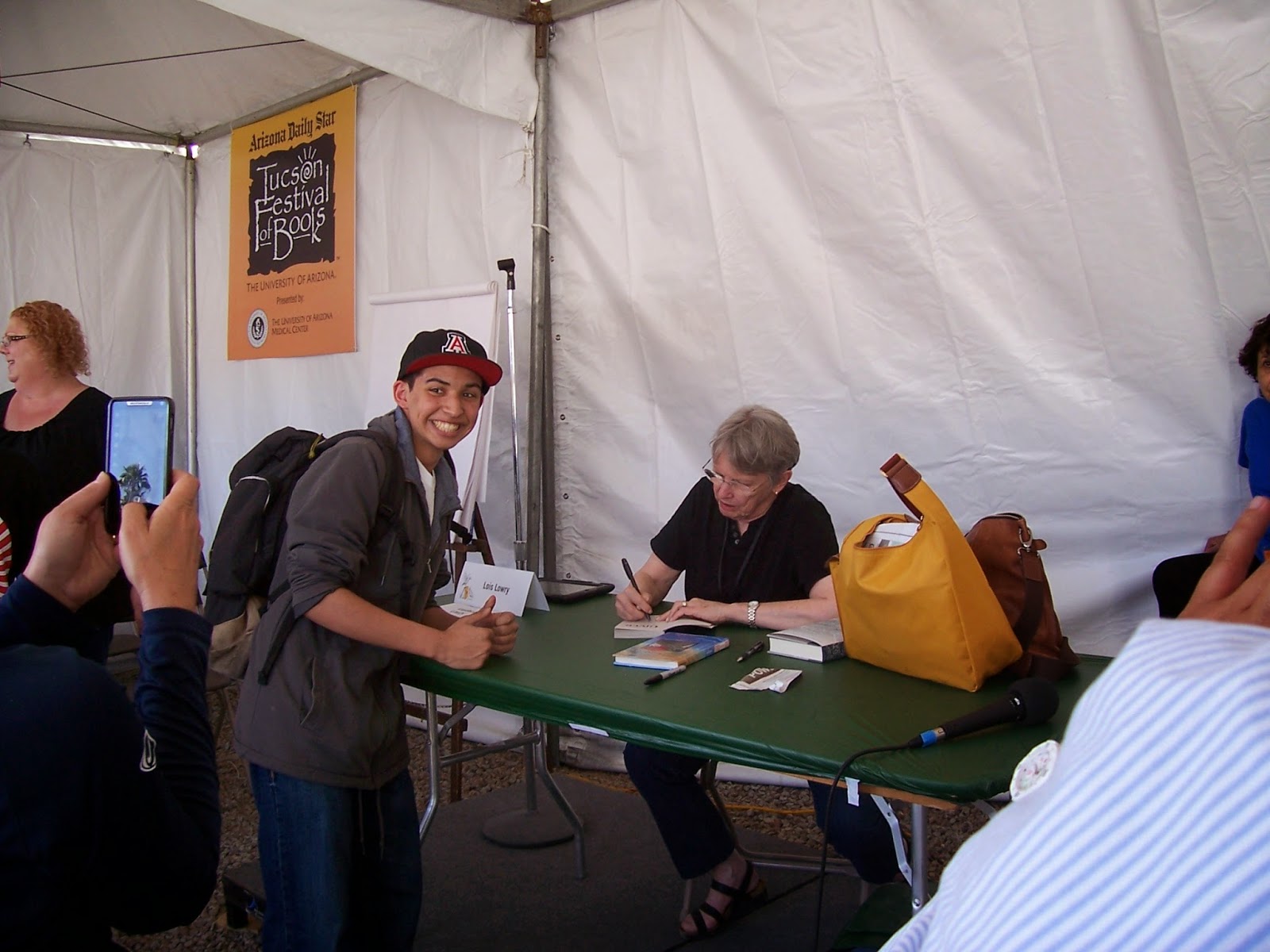 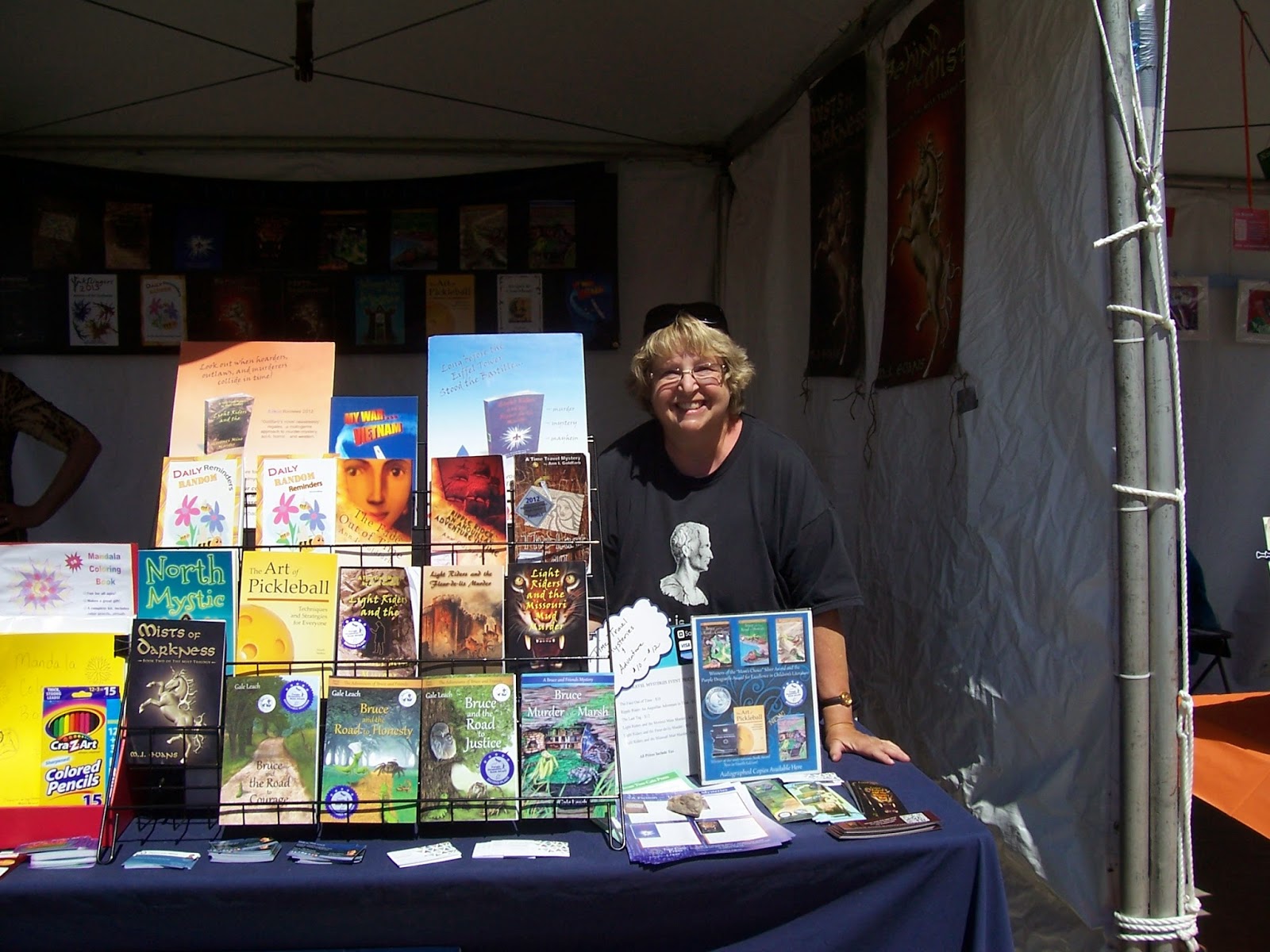 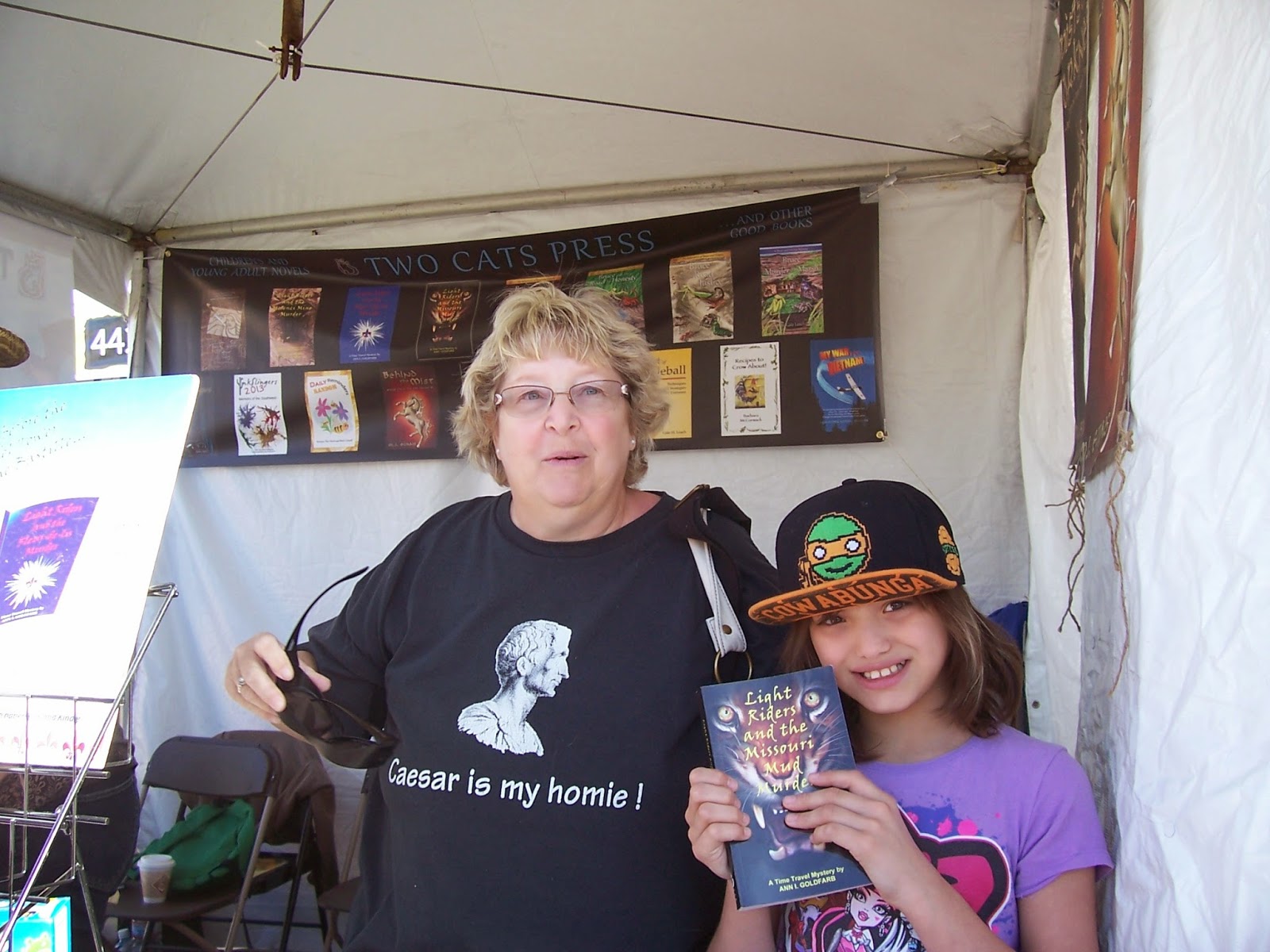 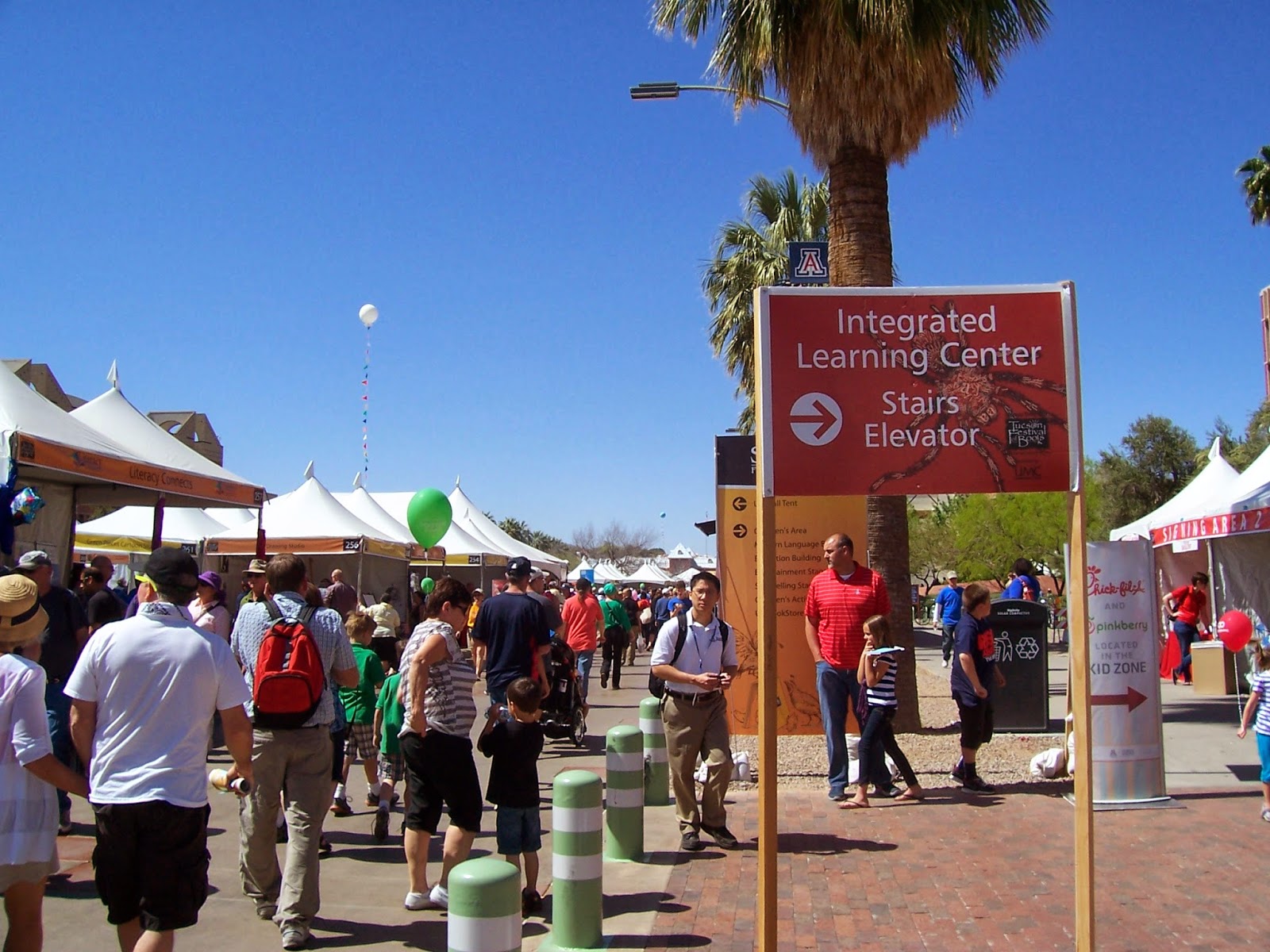 Nothing could have prepared me for the magnitude and scope of this event. It took up most of the campus of the University of Arizona in Tucson and drew a crowd between 120,000 – 150,000 thousand people!

The best part was that the attendees were readers, intent upon meeting authors and attending their workshops and presentations. I was torn between signing books at my publisher’s booth (Two Cats Press) and attending some of the incredible programs.

Highlights for me included chatting with R.L. Stine (I lucked out because he happened to be standing next to our booth), watching Lois Lowry mesmerize a crowed of middle schoolers, and nearly accosting C.J. Box because I needed him to sign books from the neighbor ladies on my street!  (You were right ladies – he was adorable! Not to mention extremely sweet and gregarious).

One of R.L. Stine’s illustrators, Trip Park, was my former student back in Ithaca, NY. R.L. Stine enjoyed hearing about Trip’s talent way back then.

The most challenging part of the experience was dealing with the heat and high winds on Saturday but attendees were undaunted and we were really energized. I’m making plans to attend next year!!!

PHOTOS:  The handsome dude in the black Stetson is C.J. Box.  The grey haired lady signing books is Lois Lowry. The other grey haired lady talking with a reader is Margi Evans. Other photos include my husband, James Clapp, in our booth, and me with a wonderful reader.
Posted by Ann I. Goldfarb at 10:58 AM No comments: