It's Not Start-Up Fatigue, It's Distraction Fatigue

I know the definition – “Failing to begin the task at hand.” But honestly, I don’t think I’m suffering from “Start-up Fatigue” every time I sit down to write and find myself immersed in something else. It’s a new phenomenon –“Distraction Fatigue.” And I blame all those cute icons on my computer screen.

Inevitably I have to check my email. And those messages all have tentacles. I can spend a full hour just dealing with someone’s lost dog or the selection of a restaurant that all of my friends can agree on for breakfast tomorrow.

“Not Paradise again. We were just there.”

“What about the Corner Bakery?”

“Someone said they closed.”

And so it goes. Then there’s my banking. I absolutely cannot concentrate until I know for certain that no one has hacked into my paltry accounts to rob me of tomorrow’s breakfast money. So I wind up checking those. Another half hour…

Then there’s this bizarre thing I do to earn rewards from my health insurance company. I get to log on and tell them all the exercise I did the day before. If I’m lucky, I remember. If not, I just write “Vacuum and dust.” Hey, someone has to do that.

Pinterest is easier. I have no idea what I’m doing. Seriously. I cannot even add to the boards I have. I wind up re-learning, getting frustrated and posting something weird to promote my novels.

Suddenly I remember my Time Travel Mysteries Fan Page and I race off to make a post that will either be engaging, or immediately ignored. Anyone’s guess.

Finally, I’m ready to write. But by now, I am fatigued. The good news is that I’ve figured out a cure. I just need to find an old word processor that has no internet capability. Then I might have a fighting chance to get my next novel penned.

Made the Top 100 on Amazon Kindle's Bestseller List? Don't Start Spending the Money Yet!

I don’t know where I’ve been because all of a sudden checking your seller ranking on Amazon is right up there with checking your blood pressure, your cholesterol, and your bank account! So…out of curiosity I decided to check the Kindle ranking for one of my books and it said 35. Yep – 35 in the top 100 for YA teen sci-fi. I was ecstatic!
Then, the truth hit. Like when you find out that the tooth fairy is really your mother. Turns out the rankings change constantly, depending upon the number of books sold at that very moment.  So…either Light Riders and the Morenci Mine Murder was a big hit or a few people decided to download it at the same time. Yeah, you guessed it. It was the latter.
Still, I’m now hooked by this thing! I pull up the numbers and get excited if I see them going down. (Lower numbers are better, high numbers mean you’d better not give up your day job). And frankly, in this business you’d better not give up any job! My last Kindle earnings said $0.28. That’s right. Twenty-eight cents. But that was the beginning of the month. Then again, that might be as good as it gets for that month.
Then there’s this category thing. In broad categories like “Mystery,” it’s tough to show a low seller number ranking. But when the category gets narrowed down, like mine did for YA teen sci-fi, it’s easier to get a lower rank. (Remember – lower is good. Higher is not). I’m thinking of really narrowing the category down for my next novel so it looks something like this:

This may really work! Oh, and now for the bad news. I just checked my ranking number again and it slipped to 42! By the time this gets printed, I might be off the top 100 list altogether. Unless of course people start downloading that book now… (I’ll keep my fingers crossed!) 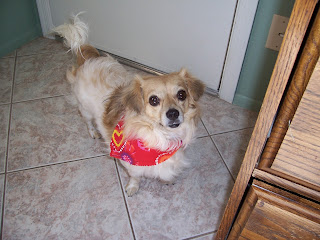 When my old cat, Elroyblues, was alive, he used to sit patiently under my desk and listen intently as I read him chapters from the books I was writing. It was the moral support I needed as a writer. No matter what I read him, he was always interested. Then my husband and I realized that the poor cat was going deaf.  When Elroy eventually passed away at 17+ years, our Chihuahua-Dachshund-Pomeranian-Papillion mix, “Streetboy” took his place. But things haven’t been going that well in the editing department. Or listening, for that matter.

“Oh my God, Jim! The dog just got up and peed on the wall as soon as I finished reading him the latest chapter of my novel. Do you think it’s a sign that my book is in trouble?”

“Then why did wait he wait till I was done with the chapter? I swear, he’s trying to tell me something.”

“Yeah, he is. Take me for a walk before my bladder bursts!”

“Lying on the rug next to your computer and licking parts of his body that no animal should smell is hardly attentive.”

“He doesn’t always do that. He looks at me when I read him paragraphs or chapters. And he tilts his head.”

“He’s straining to figure out what you want. What was in that last chapter? Maybe you read him something that sounded like ‘Go pee on the wall.’”

“That’s not funny. He was very interested in catching the murderer.”

“Well, he sat up, pawed at my leg and looked extremely enticed and engaged. Heck, half of my seventh graders never displayed so much energy!”

“I hate to break it to you but that wasn’t energy. Or interest in your book. That was the dog begging to go outside. Face it; you’ve got to find another listener.”

I took a slow, deep breath and stared directly at my husband. “You’re right,” I replied. “When can you start?”

The man was speechless. Then, he picked up the dog, tucked him under his arm and muttered, “I’m driving him to the dog park. Try one of the cats.”

“They’re not like Elroy. They chew up papers on the desk, they walk across the keyboard, they paw at the screen and they bite the wires. It’s impossible!”

“But they don’t lift their legs on the wall, do they?”

“No, I suppose not. Then again, maybe I’ll just walk the dog more often. Let’s face it, a dog with a penchant for editorial review is hard to find.”