Should Your Characters Age When Writing a Series?

Nancy Drew was forever 16 in the original series – over 50 books! In reality, there wouldn’t be enough days in the week for her to solve all those mysteries; but what the heck, it’s fiction, after all. And the choice of whether or not to have your characters age when writing a series is strictly up to you.
Author Janet Evanovich chose to have her famous sleuth, Stephanie Plum, remain a constant 30 years old. (Wish she could have done that for me). But other authors didn’t see it that way.
Harry Potter (J.K. Rowling) grew up in seven tomes that took readers from his childhood to young adulthood before letting us meet him briefly as an adult. Vampire lovers Edward and Bella grew up in Stephanie Meyer’s trilogy as well. Same for Katniss from The Hunger Games. And what about “Anne of Green Gables?” She grew up, didn’t she?
When writing “The Light Rider” time travel series, I chose to have my characters age as well. Aeden was 12 and her brother Ryn was 13 when I first introduced them in Light Riders and the Morenci Mine Murder.  I needed to establish their innocence and sense of awe at the whole concept of time travel. But two years later, when they were 14 and 15, awe was replaced by bravado in Light Riders and the Fleur-de-lis Murder, ultimately resulting in narrow escapes and harrowing adventures. At 15 and16, my characters were just beginning to understand what they wanted as they headed toward adulthood, creating internal and external conflict in Light Riders and the Missouri Mud Murder. *
I could not have accomplished those things had my characters remained the same age. Sure, they would have solved mysteries but they would always be seeing the world the same way. Age has a peculiar means of changing us. What we thought hilarious when we were 13, we find idiotic at 21. And the risks we are so willing to take as young adolescents are tempered with reason and experience as we get older.
By aging my characters I was able to create more depth in dialogue and a deepening perspective of human nature. Frankly, it’s all about what the author wants. And there’s no right or wrong. Janet Evanovich summed it up in her formidable book, How I Write.  (St. Martin’s Griffin, New York, 2006 ):
“I’m not interested in creating a realistic portrayal of someone going through all of life’s changes. My goal is to entertain my readers, to make them laugh, to make them think about certain situations and values.”
I’d like to think that I do the same in my novels. But the situations and values change as the characters get older. And that’s a challenge unto itself.
But whatever you decide to do, as long as your characters are believable and well-developed, you won’t go wrong! 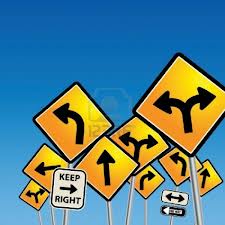 Online sales may be great. Same goes for those brick and mortar stores. But nothing gets the word out there like author presence at book festivals. Trouble is, those festivals mean lots of driving or worse yet, flying. I’ve avoided the latter so far, since I didn’t want to re-mortgage my house in order to pay for the extra weight in my luggage. But driving to some of those places can be quite a challenge. Albuquerque was no exception. It took me nine hours from Phoenix, both coming and going, even though I took different routes.
If you’re familiar with Arizona, then you know that there’s basically one highway to get you from Phoenix to Flagstaff and then another to go east into New Mexico. Sure, there are smaller roads but you have to share them with mule deer, get use to the fact that there are no guard rails, and enjoy hair pinned turns every other mile. I chose the major state road to get there and spent 7 of the 9 hours in serious prayer.
I think I was driving the only car. At least it seemed that way surrounded by tractor trailers going 85 miles an hour around curves, twists and turns.( Speed limit was 75 ). And the few downhill miles were worse. I thought it prudent to slow down to 60 miles an hour. Apparently the state of Arizona does not. After the first ten minutes I got used to the honking and horn blaring as everything passed me. Even my husband wanted me to speed up.
“Are you going to be stepping on the brake every second? I think a golf cart just passed you!”
“You can speed up when it’s your turn to drive.”
“I’ll remember you said that when I take over the wheel.”
All I could think of was getting run off the road by one of those trucks. Maybe they’ll find my novels scattered in the desert and they’ll donate them to schools…
Needless to say, when it came time for the return trip to Phoenix, I knew I needed to find a different route. Another author suggested going through the lovely mountains in Heber-Overgaard and then finalizing my descent into Payson before taking something called the “B-line” to Phoenix. Anything had to be better than the tractor trailer nightmare so I opted for that route.
The good news – I was able to go 45 miles an hour around the bends, drop-offs, twists and snakes all the way home. The bad news – my husband hated every minute of it, even though I mentioned the scenery.
“Look how scenic this is! Enjoy the mountains!”
“I’ve been enjoying the same mountain for the past 50 minutes. It should only take 10 to get around it!”
And then there were the signs. I’ve never seen so many warning signs in my life for the same series of roads:
WATCH OUT FOR DEER
WATCH OUT FOR ELK
WATCH OUT FOR MOOSE
DANGER – FALLING ROCKS
DANGER – UNEVEN ROAD
DANGER – FLOOD ZONE   (Now? We haven’t had rain in 176 days)
DANGER – STEEP CURVE
DANGER – WINDING CURVE
BUMP
STEEP HILL (Usually followed by 8%, 7%, or 6%. All of them are bad).
And then there were the signs that had symbols. I didn’t recognize any of them! But I thought my husband might.
“What’s the round thing with the balls in the air?”
“Darn if I know. Wait…wait…I think it means falling rocks.”
“It doesn’t look like any falling rock sign I’ve ever seen. Usually the rocks are shaped like rocks, not balloons in the air.”
“Well maybe these are boulders. Just speed up!”
Worst of all was the sign that said “JUMP.” It was on a steep downhill somewhere between Payson and a little known town of Rye. I freaked.
“What on earth is that supposed to mean?”
“Don’t ask me.”
“Do I speed up or slow down?”
“Speed up.”
I slowed down. Long enough to see that when I got close to the sign, some moron scraped off the B and painted a J. Thank you, whoever  you were, for taking 10 years off my life.
When I finally saw the sign that said “Phoenix-Mesa 15 miles” I felt like kissing the ground.
The next book festival is in Tucson. It’s a flat road and only about two hours from Phoenix. Yeah, I know. More tractor trailers. But at least they can pass me and my carload of books without having me worry that I’ll driving off of a cliff!
So, the next time you meet an author at a book festival, remember the lengths they went to in order to get there! 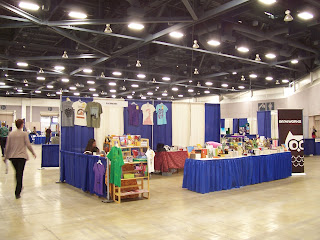 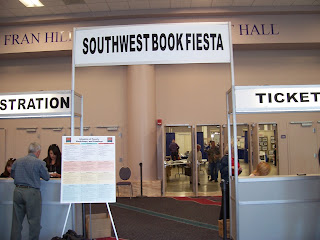 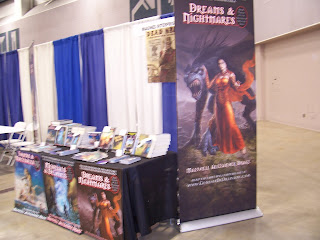 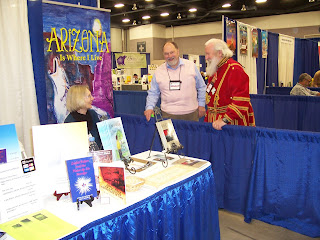 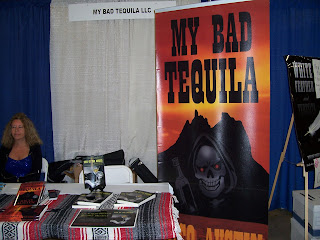 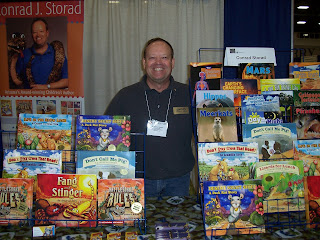 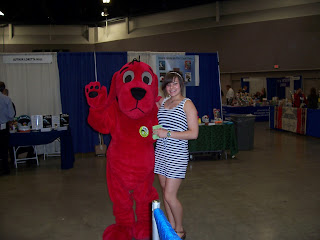 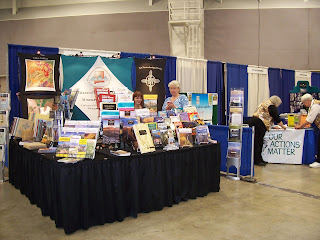 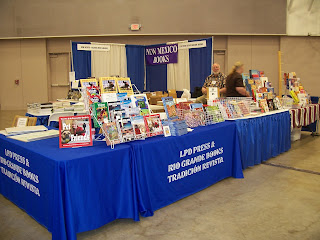 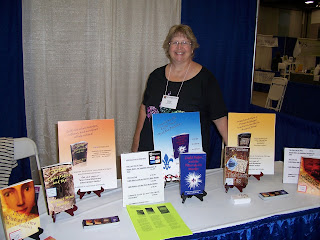 Thanks to the Arizona Authors Association, I was able to attend the Southwest Book Fiesta in Albuquerque, New Mexico this past weekend. ( May 10 -12 ). With close to 200 booths and a dynamic schedule of workshops, speakers and special programs, the opportunity to mingle with authors from the southwest was invaluable. Hosting the AZ Authors Booth were: Rico Austin, Ron Tobin, Barb Marriott and Ellen Calvert. A number of other AZ Authors, including Gale Leach and Conrad Storad, hosted their own tables. Special thanks to Toby Heathcotte and Ken Weene for enabling us to attend.  Check out www.azauthors.com for information about our association and a complete events schedule!
Posted by Ann I. Goldfarb at 8:30 PM 1 comment: 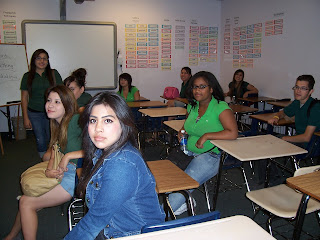 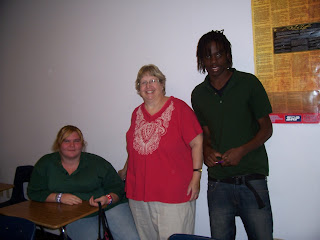 I'm thrilled to present workshops for schools that incorporate my novels into their curriculum. So when I was asked to speak at Premier Charter High School in Phoenix, I immediately chose to offer a session on teaching mood. Why? Because the novel they are reading, Ripple Rider: An Anguillan Adventure in Time, blends the dark overtones of island slavery with a modern day perspective, oscillating between two distinct moods. As the characters are forced to deal with the harsh realities of 18th century slavery in the Caribbean, they compensate with sarcasm, wit, and wry humor.

Students in this class were quick to pick up on the changing mood and demonstrated a solid understanding of how authors use words, setting and dialogue to elicit an emotional response from readers. Kudos to teacher Amy Connor Fierros for providing her students with the background to appreciate literary techniques.

It was certainly a pleasure spending time with these amazing students! And thank you for adding "Time Travel Mysteries" to your reading lists!
Posted by Ann I. Goldfarb at 1:29 PM No comments: