Warning: Writing Novels Can Be Hazardous To Your Driving 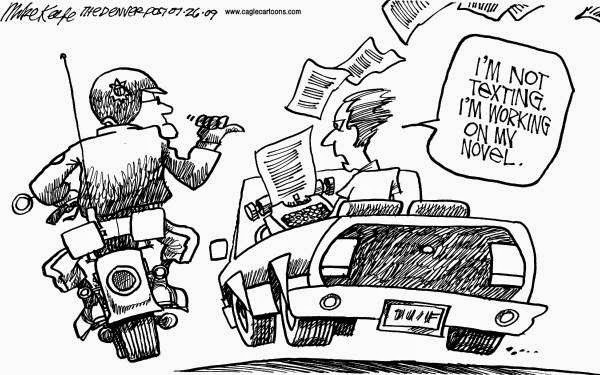 Granted, it’s not as overt as texting or putting on make-up when driving, but thinking about your next plot move or the development of your characters can be just as distracting, if not worse. At least with make-up, you still realize you’re behind the wheel of a car, even if one hand is applying the mascara.

Last week I drove to the dog park nine times. Seven of them were with the dog in the car. The other two just happened. I started out knowing that I had a different destination but a mile past my house, my mind began to wander. Actually, serpentine would be a better word.

As the first draft of my latest novel moves closer and closer to the climax, I find myself re-charting the moves that my protagonists are making. Too bad I couldn’t do that and drive at the same time. Believe me, it’s more than embarrassing when you arrive someplace and have no idea how you got there.

The good news was that I had the best spot in the parking lot. That, in and of itself, should have been my first clue. The second came when I turned to grab the dog’s leash and realized that I was holding the straps to my handbag. I couldn’t get out of there fast enough.

And then, there’s that unsettling feeling that I missed something.

“My God! I could have driven over a cow and I wouldn’t know it!”

It’s one of the hazards that writers face. Ideas pop in and out of our heads like kernels of popcorn hitting the side of a microwave bag. And why is it that my greatest epiphanies come when I’m nowhere near a pen or pencil, let alone a computer.

After weeks of struggling, I once figured out how to resolve a complex plot twist. Unfortunately, I had turned onto the I-17 heading to Flagstaff when Tucson was my destination. I try to stick closer to home now, especially when I begin a new novel. Later on, during the editing and revision phase, I’m a much safer driver and can be trusted to leave the neighborhood.

Like it or not, I’ve come to accept the fact that the creative part of my mind works best when I’m doing menial things. SHH! Whatever you do, do NOT, and I repeat, do NOT tell this to my husband or he will find all sorts of menial things for me to do including vacuuming, dishes, dusting, and changing the litter box.

And while driving isn’t exactly menial, it does cause the mind to wander. And in my case that means a nice meandering path through every conceivable obstacle my characters can face.

So in the meantime, I’ll just take my chances behind the wheel and up my insurance. I’ll also warn readers when I’m starting a new novel so you can keep a good distance away from any cars in the Greater Phoenix area.