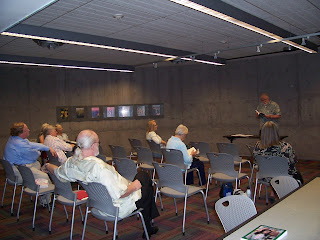 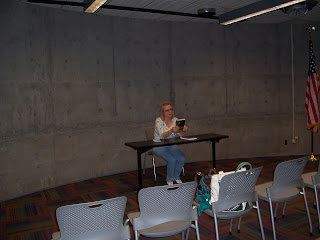 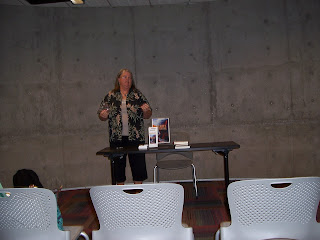 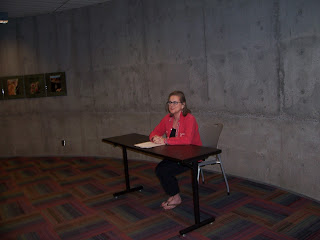 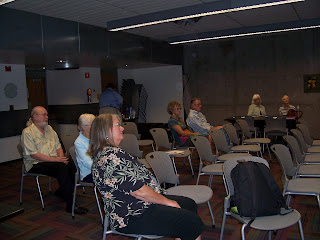 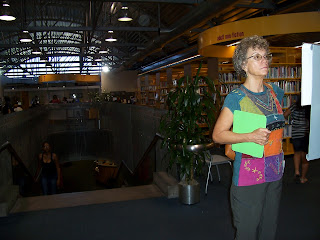 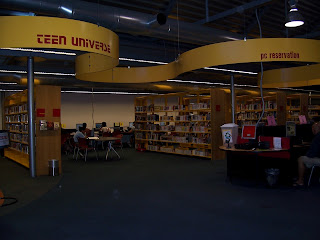 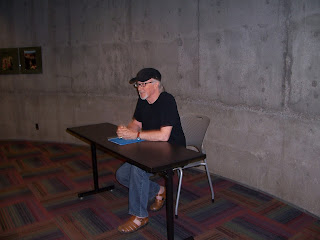 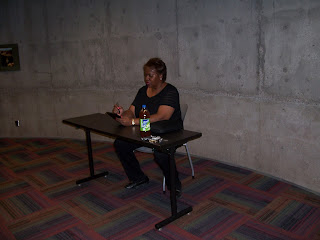 I was pleased to join the full slate of AZ Authors who participated in a special event held at the Phoenix Cholla Library by MetroCenter Mall on September 29, 2012. Authors read from their works, published or un-published, and asked for feedback, critiques or reactions.

Time Travel Mysteries presented an excerpt from The Last Tag, as EB Lyner faced off with Herculaneum's classic bully - Cossus.

But the highpoint for me was clearly the opportunity to listen to and learn from so many talented writers. I've included some photos and brief information. Please feel free to visit these authors' websites via the listing at www.azauthors.com

How Can I Get Anything Done With Cat Hair All Over My Keyboard?

Don’t get me wrong. I love my pets. So much in fact that my combined grocery and health care bills pale when compared to theirs. But I have to draw the line someplace and that battleground has become my computer room.

One of my cats thinks that the D-Link to the WIFI was designed just to keep her warm. If I’m not careful, I will find her sleeping on that little box and probably cutting off all the air it needs in order to run.

My other cat has decided that un-plugging the wires to the computer by sinking her teeth into them is a new form of entertainment.

And then, there’s the dog. The dog can’t really get to the computer, but he knows how to chase the cats down the hallway so that they race into the room, jump on the desk, and inevitably knock the freestanding keyboard to the ground where the dog now has a new chew toy.

Needless to say, I turned to Google to find out how to keep the cats away from the computer. Did you know that there are at least 50 articles claiming to solve this conundrum? Sure, if you don’t mind putting sticky tape all over your desk. Just remember not to lean your elbows on anything. Or perhaps you can build the DIY tech protector. Only trouble is, I’m not very good with a drill and I’ve never used a router! Then, there’s the motion detector that makes loud puffs of air when the cat goes near the computer. Terrific. What happens when I go near it?

And the list goes on. The dog, at least, understands the word “NO.” The cats understand that “NO” only applies to the dog. So, faced with the possibility of losing all my writing drafts, I finally solved the problem.

There’s a simple and easy solution and I honestly don’t know why it took me so long to figure out. Every room in the house comes equipped with one. And operating it is easy. It just involves turning a knob. Yep, you’ve got it! From now on, I’m closing the door to the room!
Posted by Ann I. Goldfarb at 2:40 PM No comments:

How Much Money Do You Make Writing Those Books?

My first novel had only been on the market for a month when it seemed as if everyone in my family, my neighborhood, and the Greater Phoenix Area needed to know how much money I made. Frankly, it was easier to tell them how much money I spent considering the entire marketing aspect. Still, the questions persisted.

“So, how much money did you make?”

“Are you still going to keep your other jobs?”

“I don’t need the exact figure, but approximately, how much do you make a month?”

Initially, I dismissed this mini-inquisition into my finances and simply said, “I’m doing OK. I’m just getting started.” But I kept getting hounded. And with each new book that was published, the nagging continued.

“I just need to know how much money you make because I may decide to start writing. Of course, I’ve never written anything before, but if it’s a money-maker, I may just go ahead and write my own novel.”

“Are you making more money now that you have written other novels? How much more?”

I’ve avoided actual responses to these questions the same way I avoid confronting the coyotes in my neighborhood when I take the dog for a walk. I duck in-between houses, run as fast as I can while carrying a squirming 10 pound dog, or I shake a soda can of rocks at the coyotes and yell, “Go Away! Go Away!”

Unfortunately, I can’t go around shaking rock filled soda cans all the time. And then, it dawned on me. I need to do the same thing. With any luck, they’ll be running from me.

“So, how much money did you make with that telemarketing job last year? If it’s substantial, I might just get use to yacking on the phone.”

“Can you tell me your monthly income working as an insurance agent? It it’s decent, I might just consider it, even though I have no experience.”

“How much money did you make with AVON last month? Was it more than you made when you sold GOLD CANYON CANDLES?  I may want to do something like that.”

Yeah, it may just work. Of course I really don’t want to alienate my family and friends, so I think I’ll settle for this response.

“I didn’t make enough money to move me into another tax bracket, but when I do, I’ll shout it from the roof of my house and send out a massive email! In the meantime, I just hope Time Travel Mysteries catches on because the personal investment I’ve made out weighs anything else.”

Say, You Should Write a Novel About....

I don’t know if this happens to other authors, but whenever someone finds out that I am a writer, they inevitably have “the best story for me” to write. I hate disappointing people and certainly need all the fans I can muster, but some topics are just not for me. I write young adult mystery-suspense novels and continue to work tirelessly perfecting my craft. Yet, I’m barraged by ideas wherever I go.
When I first started writing, one of my neighbors insisted that I pen a novel about all of the people who live on our road. She was adamant. “Ann,” she said, “I know all the gossip and dirt on everyone. Who’s cheating on their wives, their taxes and their diets!”  YIKKEES! That’s the last thing I need – to write a novel that will fling a lawsuit in my face before I get my first royalty check.

Then there was the 80 something lady who met me at a book signing and proceeded to hoist a huge suitcase on my table. “Inside of this suitcase,” she said, “are all my diary entries since I was in 8th grade. I think you should read them and then write a book about me!”  I had a tough time explaining that I’m really not conversant with ghost writing or telling other peoples’ stories; but I did manage to give her a few other options.The list goes on.

“You should write about my cat, Muffles. He’s one of a kind.”  Well, I have cats, too, and the last thing I want to do is write about them. It’s bad enough I have to clean up after them. I swear, they toss up hairballs as if it’s an Olympic sport!

Then, there’s my personal favorite. Someone actually told me that I should write a cookbook. I gasped and almost hyperventilated. A cookbook? Have you ever tried my cooking? My husband is petrified if I even go near the kitchen! He knows. He watched me make spaghetti once and the sauce was a bottle of ketchup. (It was an old family recipe).

So, readers and fans, please don’t be disappointed. There are great authors out there who will write about all of you topics. For me, well…I’m going to stick with time travel mysteries and adventures with the hopes that you’ll read them!
Posted by Ann I. Goldfarb at 2:27 PM No comments:

What Have I Done Wrong This Time?


What have I done wrong? My characters aren’t going to be stripped to their souls with angst as they struggle with inner turmoil and futile endeavors. Aeden ( “Light Riders and the Morenci Mine Murder”) may jump from a moving train but she’s not about to throw herself under it like Anna Karenina. Sure, my protagonists willl have conflicts and lots of them, but it’s all in good fun. Whatever happened to just plain old adventure and edge- of- your- seat suspense?
Needless to say, I’ve just read another expose from some expert explaining that writers must “continue to tear open the wounds that their characters have buried until the soul bleeds.” Bleeds? Really? Can’t EB Lyner (“The Last Tag”) just sneak around Ancient Rome on his skateboard until he finds the murderer?
I feel like screaming “Lighten Up!” Not every novel needs a Kafkaesque plot or layers of repressed Faulkner–like emotion to engage readers. Sometimes you just need a good laugh.
Try telling Sophie Kinsella that her protagonist in Shopaholic really needed psychoanalysis or that Janette Rallison’s teenager girl characters should undergo Freudian counseling because they’ve just caught their boyfriends cheating!
My characters may whine, scream, curse and take ridiculous risks while time traveling, but they won’t be driven to the point of unleashing their inner demons. Did Nancy Drew? Did the Hardy Boys? Did Doctor Who?
I guess I’ll just have to live with the fact that my characters will use all of their physical strength and mental capacities to solve mysteries, survive treacherous adventures and walk away only to come back another time and do it again! Can Hamlet say that?
Posted by Ann I. Goldfarb at 8:10 AM No comments: