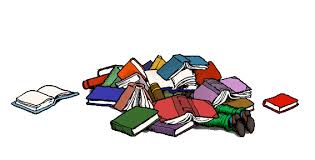 Yeah, I’m familiar with the old adage “Be careful what you wish for,” but when it comes to book reviews for my novels, I’m like a kid in a candy shop. I just can’t wait to see what people have written, even though it may not be what I’d hoped for.

This past month, I’ve given away a few free books on “Goodreads.” So, every day without fail I rush to my email hoping that one of the recipients has posted a review. No news yet. But I’m thinking any day now.

Reviews are the lifeblood for authors. With so many print and digital options out there for readers, reviews serve as the unofficial seal of approval before choosing the next title for perusal. Granted, everyone’s taste in reading is different, but still, it’s nice to have some sort of reference. And reviews are not advertisements. They are the frank, honest reactions that readers have to the book. (At least they should be).

And readers’ voices matter. Just like consumers’ voices do when you finally decide to purchase an appliance or a car. (We bought our last car because one of my aunts absolutely raved about it. We found out later that she loved the car because the driver seat was big and the cup holders for her coffee were adjustable). And then there was the termite company. Out west, you need a termite company. Those subterranean critters can invade a castle in a matter of days. We were smarter this time. We talked to the neighbors up and down our block before signing a contract with a local exterminating company. Reviews matter!

So if you’re an avid reader or a once in a while reader, it doesn’t matter. Please post a review. You can join Amazon, Goodreads, or Manic Reader. All of them are just waiting to hear from you. And honestly, so am I!

Don't Throw Out Those Paper Files Yet 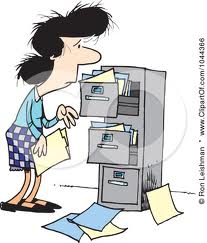 At least once a month one of my file cabinets gets stuck. And I mean stuck! No amount of pulling, yanking or shaking will help return the drawer back into its cabinet. Pleading and cursing don’t help either. That means one thing. I’ve stuffed and crammed too many copies of my writing into the darn thing and managed to loosen one of the screws on its sliding metal sides. The only way out is to empty it, remove the drawer and reinsert the screws. Sounds simple enough, but it’s really a two person job and the other person, my husband, isn’t always thrilled.
“We have a computer. Can’t you just back-up your files without copying all of them?”
“I don’t want to lose them.”
“That’s why they invented flash drives…and that cloud thing.”
“But something could go wrong.”
“What do you call spending an hour with the file cabinet?”

In fairness, some of the stuff I’ve written was penned long before computers were around. And I just haven’t had the time to re-type my junior high diary entries, short stories, plays and that dreadful first novel that may never see the light of day. But I don’t want to part with them either. Just in case…
And then, there’s the “back-up” stuff. Yeah, I do make flash drive copies and I send email versions into cyberspace, but I still can’t sleep at night unless I know I’ve got a written copy of whatever I’m working on, safely stored in a file cabinet. I blame my high school teachers for this. And my college professors. And my mother.

The mantra was always the same.

“Don’t turn in any work without making a copy for yourself!”
I think that’s because photocopy machines were just invented and their advertising went a long way. Nonetheless, I was brainwashed. Brainwashed and obedient. I made copies of everything – from spelling lists to book reports. So it’s no wonder decades later I can’t break the habit.
But I prefer to look on the bright side. If my computer crashes or something heinous happens to my flash drives, I’ll always have the file cabinets. Provided I can still open them!
Posted by Ann I. Goldfarb at 7:33 PM No comments:

Sometimes You've Got to Pound the Pavement 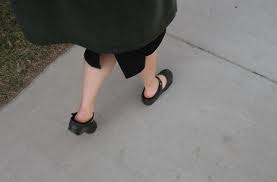 The Fuller Brush guys did it. And so did the Avon ladies. Then things changed. The internet took over and suddenly sales were all online. Don’t get me wrong. I love the internet and I thrill every time someone purchases one of my books from Amazon, Barnes & Noble or Kindle.  But when you’re an indie author like me, you still want to see your titles in those brick and mortar stores. So… what’s left but hitting the pavement! Unless of course you have your own publicist who is getting paid to wear out the soles on his or her shoes!
I have myself. And thankfully my husband, who’s willing to tag along especially if there are good restaurants along the way. Today’s venture took us to Cave Creek, Arizona; and I’m thrilled that  a neat little gift shop, Jose Antonios’ Custom Framing & Gifts, adjacent to the Horny Toad Restaurant, was willing to take a chance on one of my novels.
Armed with my Kirkus Review, custom bookmarks and business cards, I scoured gift shops like hounds going after the fox. But the best part was getting to meet store owners and managers who were all trying to make it in this tough economy. So when one of them agreed to take on “Time Travel Mysteries,” you can understand how ecstatic I was.
And frankly, nothing beats the opportunity than to present your own work to someone. After all, no one is going to be as well versed or enthusiastic about your writing. (Although one of my cats absolutely adores my books – for entertaining herself by chewing the edges and leaving bite marks all over). Nonetheless, there’s so much to be gained by meeting face to face with prospective clients.
So until my name becomes as recognizable as Nora Roberts or E.L.James, I’ll be pounding the pavement!  And thank goodness the food was great at The Horny Toad!
Posted by Ann I. Goldfarb at 4:36 PM No comments: 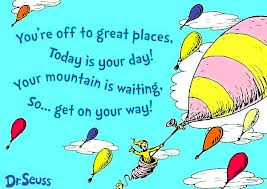 It never fails. Every time I send a draft of my latest novel to my editors, my mind begins to spin with cloudy images of the next one I’ll write. And that familiar refrain from Dr. Seuss’ memorable children’s book keeps playing in my mind. “Oh, The Places You’ll Go.”

That’s the beauty of writing time travel mysteries. I can go anywhere and everywhere I want, taking daring adventures every time I click something on my keyboard. Let’s face it, daily life isn’t exactly that adventurous, so I need imagination to fill in the rest. Or do I?

In the past week, this was the closest I came to high adventure:

Steered my car out of the way when someone in a golf cart couldn’t figure out left from right and worse yet, didn’t know how to use the turn signal.

Carried my 10 pound Chihuahua-Dachshund home from his walk, screaming “Those were coyotes! Not doggies from Play Park!”

Made it home from doggie Play Park without having to hose off my shoes.

Grabbed a shovel and removed a large poisonous toad from my yard, only to have it return at night and jump into the garage. Then yelled for my husband to “do something about this!”

Tried a new restaurant only to see it listed on the “Health Inspection Violation List” in the paper the next day.

So you can probably understand why I’m always seeking out new venues for my time travelers. My sixth novel will take the “Light Riders,” Ryn and Aeden to Missouri. But it’s the when that should have readers frantically turning the pages if I’ve done it right. Meanwhile, it will give my editors something to do, so don’t expect to see it on bookshelves or online until late summer or early fall.
That leaves me adrift once again. And “Oh, The Places I’ll Go.”  My mind is already conjuring up continents, countries and cities in time. Thanks Dr. Seuss for understanding.

Book Launch for "Light Riders and the Fleur-de-lis Murder" 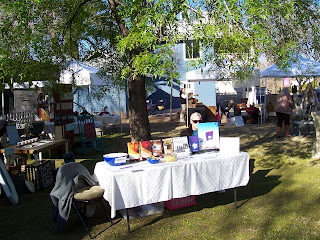 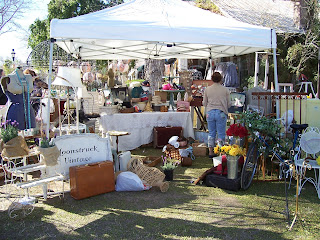 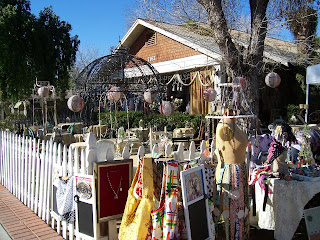 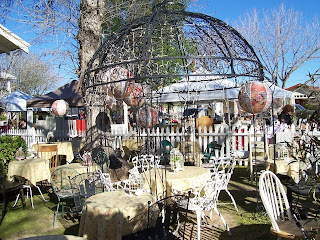 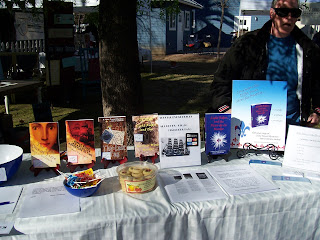 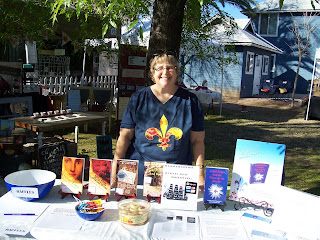 Thank you Cottage Garden Shoppe and the City of Glendale Visitors' Center for inviting Time Travel Mysteries to launch its latest novel. What a fabulous venue! Hope to return for "Paris in the Spring" in 2014!
Posted by Ann I. Goldfarb at 10:33 AM No comments: